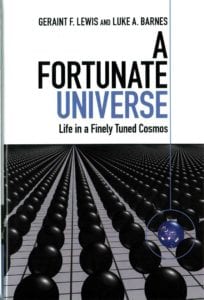 “’Any coincidence’, said Miss Marple to herself, ‘is always worth noting. You can throw it away later, if it is only a coincidence.’” (p. 238, quoting Nemesis (1971), Agatha Christie).

If the universe were different, we wouldn’t be here. With the help of modern cosmology this seemingly unremarkable claim can be vastly expanded upon, reaching in this book a set of surprising physical ‘coincidences’ required for life. Our best cosmological models suggest that if physical laws as we know them or the initial conditions of the universe had been slightly different, life could not exist.

‘A Fortunate Life’ is a famous Australian book about the surprising and fortunate twists and turns in one man’s life during the 20th Century. ‘A Fortunate Universe’ is a perhaps yet more amazing tale of literally cosmic coincidences in the structure and early history of the universe. These are prerequisites for life to exist anywhere. The authors, Geraint Lewis and Luke Barnes, are cosmologists from Sydney, Australia. They are both active in research on cosmological models discussed in the fine tuning literature, but disagree on their broader implications. The result is a robust defence and explanation of the physics of fine tuning and fair-minded discussion of what it might all mean. It is overall quite neutral, and also like a neutron, coincidentally, has a two to one tripartite internal structure. The first two thirds of this book explain the concept of fine-tuning and the science behind it, while the last considers implications. A grasp of the overall structure of modern physics is needed to begin to make sense of the controversy, and this structure is helpfully explained. We are given fascinating background on core features of today’s cosmological models such as entropy, dark matter, time, and symmetry. This is all a prologue to the remaining third, which efficiently responds to common objections to fine tuning and then in closing explores the authors’ differing perspectives on the wider implications.

Physics as we know it at the moment comes with a set of free parameters that are not fixed by the structure of the theories but had to be attained through empirical experiment. These factors determined the evolution and structure of our cosmos. Both the values of physical constants found in laws and certain initial conditions are in this category. For one of each, consider the masses of subatomic particles, and the initial distribution of matter in the universe. Changing these or other features slightly can have disastrous results. The alternative we fortunately avoided was an “eternal loneliness of life in a universe where particles collide every trillion years or so” (p. 244) – not much to work with. As the authors note, “evolution assumes a minimum of biochemistry” (p. 243), and biochemistry requires various molecules, which require a range of elements and interactions between particles.

An illustrative analogy from a simulation of evolution is given. John Conway’s ‘game of life’ computer program ‘evolves’ according to fixed rules through simple states represented by blocks on a screen. It is famous as a highly simplified representation of evolving life forms. One study of this system discussed by Lewis & Barnes showed that very few of the possible sets of rules allow the development of unpredictable complex simulated life forms. Lewis and Barnes conclude that life both in that simulation and more generally is situated “on the edge of chaos”, requiring a particular rare kind of physical order. The example is a very simple one, but supports the general inference that “Interesting, complex, organised, information-processing universes require fine-tuned rules”. (p. 234).

In order to keep our universe stable enough to support life on Earth a host of balancing acts are required. For instance, galaxies are formed through gravity collecting matter together; but because of other forces operating between particles which keep them apart, gravity would actually not be strong enough to form galaxies were it not for a reduction of particles’ energy through radiation. The alternate risk of complete collapse into a black hole is prevented by the rotational motion of the forming galaxy. The strengths of the various forces must be balanced appropriately to allow such key processes (pp 150-151). Through all the examples the strong impression is given that fine tuning problems are not a peripheral issue for cosmology. Rather, the basic question of how to account for the core features of the universe that allow life to exist percolates through the discipline. Many references to the recent research literature are provided for those who want to investigate further. Another highlight is clear explanations of key concepts. The central concept of ‘fine tuning’ is helpfully defined as a “suspiciously precise assumption” (p. 29).

As described in the neutral terms of physics, fine tuning doesn’t entail much of broader interest outside of science; it is just a claim about the rarity of a particular kind of physical system amongst hypothetical systems with different parameters. But perhaps this still has implications. The two main explanations of the fine-tuning coincidences settled on as plausible by Barnes and Lewis are an inflationary multiverse scenario and a universe designer. The main objection to the multiverse is the ‘Boltzmann brain’ problem of, roughly, how to explain the complexity of our observations when most observers live in simpler universes. The main objection to the universe designer concerns our lack of knowledge of the putative designer’s intentions – one almost wishes the designer had communicated with us in some way … Discussion of these necessarily, or possibly contingently, strays into the neighbourhoods of modal logic, probability theory, and even historical theology. I learned, for instance, that the 6th Century philosopher Boethius knew that the earth was effectively a point in relation to the universe (p. 266). The philosophical competence is particularly impressive, and rare in this kind of book.

The questions raised also go beyond traditional territory in considering fine tuning and its implications. It is intriguing, for instance, that studying fine tuning is connected to mathematical aesthetics. Mathematical symmetry in some of the fundamentals of physics allows for conservation principles such as the conservation of electric charge. If total electric charge across the universe were unbalanced by one part in 10^36, electromagnetic repulsion would prevent gravity from forming galaxies, starts and planets. (p. 196). Why abstract equations that human mathematicians often find aesthetically pleasing should describe the real universe is a remarkable mystery often remarked on, and it is connected to fine-tuned mathematical symmetry buried within physics. Beyond this deep question concerning the nature of mathematical order, the even more fundamental question of why there is order at all is raised. An impressive illustration of the quotable “The universe is comprehensible because it is compressible”, is the fact that the Large Hadron Collider can collect 50 terabytes of data a day on particle collisions, and all of this more or less fits the standard model, the formalisation of which can fit on a single sheet of paper (p. 235).

“A Fortunate Universe” will repay re-reading, and leave much to ponder. Is cosmology a fragile final frontier for the ancient design argument, in peril of being overrun by a myriad of alien universes or future physics? Or could it be a launching pad for further metaphysical reflection, building up from the fundamental particles through biochemistry even to biological constants or the course of evolution itself? Only time will tell. Naturalists reading this may punt towards future physics for salvation from the dilemmas on offer – but doing so is an act of faith that may undermine the hard scientific realism commonly appealed to in rejections of the supernatural.

There is good reason to hope that starting at the beginning of the universe and foundations of physics will help many physicists and science enthusiasts ponder this universe at a deeper level. Multitudinous open questions remain, but appearances indicate we really are fortunate to be alive.

‘A Fortunate Universe’ was provided to the reviewer by Cambridge University Press for assessment.